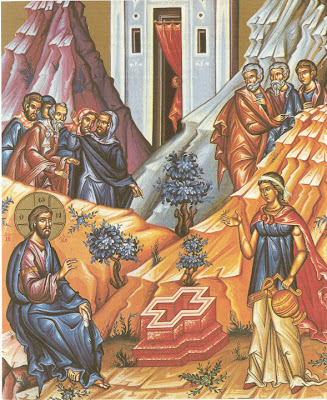 QUENCHING THE THIRST OF A PARCHED SOUL
It was a long, rugged journey from Judea to Galilee -a journey that necessitated traveling through the region of Samaria. It is no wonder that our Lord, weary from such a grueling trip, paused to rest in the heat of the noonday sun at a well in the village of Sychar. His Divine Body was in need of water, but as this morning's lengthy Gospel lesson relates, Christ encounters someone with a far greater "thirst." A Samaritan Woman comes to draw water from the well, and Jesus strikes up a conversation with her. If only the Pharisees could see Him now! Not only was Christ talking to a Samaritan - bitter enemies of the Jews - but a woman no less! This just wasn't something that would have been deemed as "politically correct" at this point in time. Our Lord, however, cared little for the norms of society - He was much more concerned with changing the direction of the life of a soul that had gone astray.

As this fascinating dialogue between them unfolds at the well, we soon understand that the Samaritan Woman has had a troubled past. She has had five husbands, and currently is living with another man. But rather than judge her for her moral shortcomings, Christ sees her as someone who is searching for something. He knows what that "something" is: it is the "living water" that only He could offer and provide. It didn't matter if she were a woman or if she were a Samaritan. Jesus saw her as a child of God seeking the Messiah. By the end of their conversation, the woman knew, indeed, that she was speaking to the One for Whom the world had been waiting.

The Samaritan Woman would one day be known as St. Photini, which means "the enlightened one." She would go on to be a great missionary, proclaiming to the world the Gospel of Jesus Christ which she learned at the town well in Sychar one fateful day. 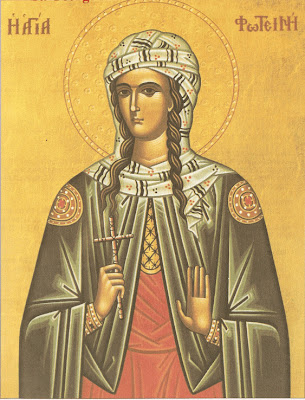 THE FIRST EVANGELIST
The story of the Samaritan Woman is one that is familiar to all of us. While passing through the town of Sychar, Christ is weary from His journey and sits at the town well while His Apostles go into the city to buy food. He strikes up a conversation with a woman and before their verbal exchange is completed, she fully understands that she is speaking to the Messiah: the One Who can offer her “living water.”

The tradition of the Holy Orthodox Church is that this Samaritan Woman, later baptized and given the name “Photini” meaning “the enlightened one”, was the first person to evangelize, or spread the news about Christ. This is based on the words of John 4:39, “And many of the Samaritans of that city believed in Him because of the word of the woman who testified: ‘He told me all that I had ever done.’” Along with her two sons and five daughters, Photini went to Carthage, where she preached the Good News of Christ’s Resurrection. They were soon arrested and taken to Rome, where the Emperor Nero placed the men in prison and had Photini and her daughters enslaved in his imperial court. Photini and her family were tortured relentlessly by the ruthless ruler. Still, their faith never wavered, and their examples caused others to convert to Christianity as well. Eventually, Photini and her children were all martyred. Ironically, Photini met her end by being thrown down a well, refusing until her dying breath to renounce the Saviour she had met at a well many years before.