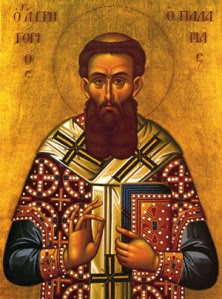 The teaching of St Gregory is so fundamental to Orthodoxy that he is especially commemorated each year on the second Sunday of Great Lent as well as on November 14. Bishop Kallistos observes in the English edition of the Philokalia, “his successful defence of the divine and uncreated character of the light of Tabor...[is] seen as a direct continuation of the preceding celebration, as nothing less than a renewed Triumph of Orthodoxy.”
The son of a prominent family, St Gregory was born (1296) and raised in Constantinople. At about age twenty, he abandoned a promising secular career to become a monk on Mount Athos. (His family joined him en masse: two of his brothers went with him to the Holy Mountain; at the same time his widowed mother, two of his sisters, and many of the household servants also entered monastic life.) He spent the next twenty years living as a hermit, spending five days a week in complete solitude, then joining the brethren on weekends for the Divine Liturgy and its accompanying services.
Around 1335 he was called to live a much more public life in defense of the faith and spirituality of the Church. A Greek living in Italy, Barlaam the Calabrian, had launched an attack on the hesychastic spirituality of the Church. Fundamentally, Barlaam denied that man can attain to a true vision of God Himself, or true union with Him, in this life. Gregory, recognizing in this an attack on the Christian faith itself, responded. He even left the Holy Mountain and re-settled in Constantinople so as better to wage the struggle, which had become so public that a Church Council was called to settle the issue. St Gregory's views were affirmed, and Barlaam's condemned, at the Council of Constantinople of 1341.
Though Barlaam himself returned to Italy, a series of his followers continued the attack, eventually resulting in two more Councils in 1347 and 1351, both of which affirmed the hesychasts' position. Metropolitan Hierotheos (The Mind of the Orthodox Church) writes that these councils have “all the marks of an Ecumenical Council;” This, along with the fact that St Gregory's views are affirmed in the Synodikon of Orthodoxy (appointed to be read in churches every Sunday of Orthodoxy), and his commemoration every second Sunday of Great Lent, makes clear that his teaching is a basic and indispensable part of the Orthodox Faith.
In 1347 St Gregory was consecrated Metropolitan of Thessaloniki, where he served until his repose. (He spent a year of this period as the prisoner of Turkish pirates). Despite (or due to?) his austere monastic background, he was revered by his flock: immediately after his repose in 1359, popular veneration of him sprang up in Thessaloniki, Constantinople and Mt Athos and, in 1368, only nine years after his death, the Church officially glorified him as a saint.
St Gregory was always clear that unceasing mental prayer is not a special calling of monastics, but is possible and desirable for every Christian in every walk of life.
Posted by kbkl at 9:33 PM