Saint Stylianus - "Let the little children come to me ..." 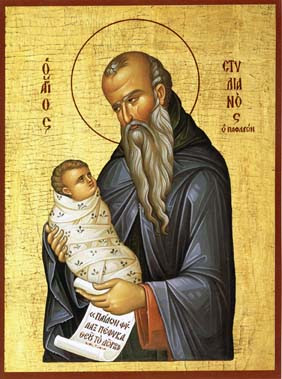 Saint Stylianus was born in Pamphlagonia in Asia Minor some time between the 4th and 6th centuries. Like many of the early saints, Stylianus inherited a great fortune when his parents died. He could have lived out his life in luxury, never wanting for anything. Instead, he chose to give everything away so that he could “take up his cross” and follow the Lord. Stylianus left the city to live in a monastery, where he zealously practiced the ascetic virtues. When the other monks became jealous of his pious life, Stylianus left the community and went to live in a wilderness cave, constantly spending his days in prayer and fasting.
Word soon spread of the exemplary life that Stylianus was living. Many inhabitants of his home town of Pamphlagonia would conme to hear his teachings and seek his wise counsel. It is said that his healing prayers were powerful, and many people were cured of their illnesses through his prayers.

St. Stylianus was known to care strongly for children. It seemed that his healing prayers were most successful when sickly children were brought to him. When St. Stylianus died, his face shone radiantly, and an angel appeared to take his soul to heaven. Even after his death, many parents continued to pray to him to intercede on behalf of their little ones. When a child became ill, it was quite common for parents to have an icon of St. Stylianus painted and hung over the child’s bed.

St. Stylianus is remembered as a protector of children and a patron saint of childless women. This is the reason he is depicted holding a child.
Posted by kbkl at 5:23 PM