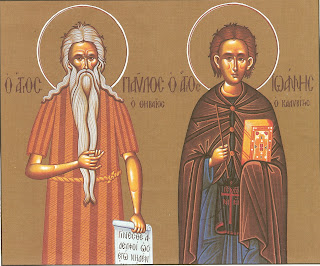 In January, our Holy Orthodox Church honours two monastic saints who lived in different centuries and in different centuries and in different parts of the world. It is fitting to remember them together on the same day, since they both lived remarkably similar ascetic lives. PAUL of THEBES was born in Egypt during the reign of the emperor Decius. He and his sister each inherited half of their parents’ property when they died. Paul’s pagan brother-in-law threatened to reveal to the local authorities that he was a Christian if he did not give him his share of the family inheritance. Paul did so willingly – not out of fear – but rather out of conviction for following the monastic way of life. He went out to the desert and spent the rest of his life living as a hermit. Even the renowned monastic St. Anthony the Great visited him in the desert and reported back to his fellow monks at this monastery the spiritual heights that had been reached by Paul. Paul of Thebes died in 341 AD, having lived over 100 years.

JOHN the HUT-DWELLER was born into a wealthy family in Constantinople in the early 5th century. Unimpressed with the riches of the world, he fled from home at an early age and settled in a monastery, where he stayed for six years. Tempted by the devil to return home and live a life of luxury, John left the monastery. Indeed, he went back to his parents’ house, but returned dressed as a beggar. Not recognizing their son, John’s parents gave the “beggar” permission to live in a hut on their property. For three years, he spent his time praying for his parents. When he ultimately became gravely ill, John revealed his identity to them by showing them a precious Gospel they had given him as a child – his only earthly possession. This humble saint passed into eternity in 450 AD.
Posted by kbkl at 7:56 PM