The Beheading of Prophet and Baptist John 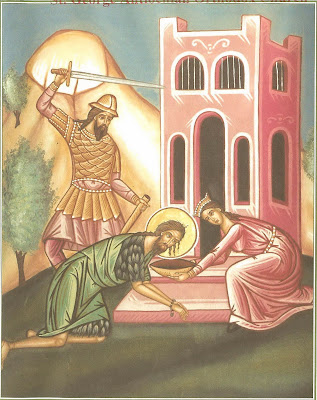 Icon written in Greece by Miltiadis Afentoulis
The story of the beheading of John is found in Mark 6:14-30. His head is preserved in the Church of St. Sylvester in Rome.
Troparion of the Beheading of St. John the Baptist
The memory of the righteous is celebrated with songs of praise, but the Lord’s testimony is sufficient for thee, O Forerunner. Thou wast shown indeed to be the most honorable of the prophets, for in the waters thou didst baptize Him Who had been proclaimed. After suffering with joy in behalf of the truth, thou didst proclaim even to those in Hades the God Who appeared in the flesh, Who takest away the sin of the world, and granteth us the Great Mercy.
"I AM NOT WORTHY TO UNDO THE STRAP OF HIS SANDAL"
St. John the Baptist played a vital role in the story of salvation for the human race. The son of Zacharias and Elizabeth, John lived his adult life as a recluse in the Judean wilderness. It had been foretold by the Archangel Gabriel that “… he would be filled with the Holy Spirit even from his mother’s womb. And he will turn many of the children of Israel to the Lord their God,” (Luke 1:15-16) It is no wonder then that many who heard him preach and came to the Jordan River to be baptized by him thought that he might be the long-awaited Messiah.
John however never lost sight of what his calling was. He had no “illusions of grandeur”, for he fully understood that he was to be the “Forerunner of Christ - the one who would prepare the world for the coming of the Saviour. He was the “voice of one crying in the wilderness.” Yes, John made it perfectly clear to all those who listened to his words: “There comes One after me who is mightier than I. I am not worthy to undo the strap of His sandal.” (Mark 1:7) After baptizing Jesus - something that he thought himself unworthy to do -John was content to fade into the background and allow our Lord to begin His redemptive work.

As Christ embarked upon His Divine Mission, John continued to preach the message of repentance to all who would listen. Never afraid to speak the truth, John was arrested and cast into prison for criticizing King Herod for his adulterous relationship with his brother’s wife Herodias. This eventually would lead to his execution by means of beheading.

St. John the Baptist is held in high esteem by our Holy Orthodox Church. The words of Christ Himself attest to the stature of this remarkable saint: “Among those born of women there has not risen one greater than John the Baptist.”(Matthew 11:11)
The Orthodox Weekly Bulletin … Vestal, Cliffwood, New Jersey … Litho in U.S.A.
Posted by kbkl at 10:23 AM