Our Father Among the Saints Ambrose, Bishop of Milan

Ambrose was born of eminent parents. His father, a pagan, was the imperial governor of Gaul. His mother was a Christian. Ambrose himself was well-educated and occupied an important government position at the time he was selected by the people of Milan to be their bishop. Accepting baptism, he was ordained to the priesthood, and shortly thereafter was consecrated a bishop. He left many works of theology. He forbade Emperor Theodosius from entering church until he repented of a dreadful massacre in Thessalonica. He died in 397. 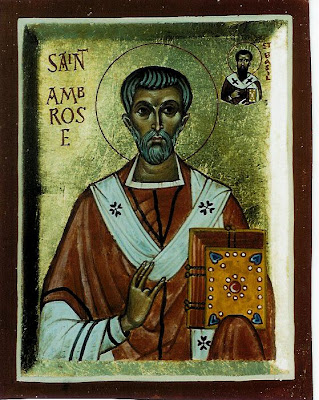 More on Amobrose …
Our father among the saints Ambrose of Milan came to be bishop of Milan as the only competent candidate to succeed Auxentius, a bishop of Arian persuasion, in 374. A catechumen and trained as a lawyer, he learned his theology through intense study of subject as he was successively baptized and then consecrated as Bishop of Milan. He held to the Nicene belief and through the eloquence of his arguments he persuaded Emperor Gratian to the Nicene confession. Later, he persuaded Gratian to convene a local council, in 381, at Aquileia that deposed the Arian bishops Palladius and Secundianus from their episcopal offices and thus strengthened the Orthodox position in the West. Ambrose zealously combatted imperial court attempts at favoritism to the parties of Arians, the "old" religion, and the Jews, particularly opposing the favors from Emperor Valentinian who supported the Arians. In defending the Orthodox position he has often been compared to St. Hilary of Poitiers. He was known for his sermons which greatly influenced the conversion of Augustine of Hippo. His feast day is celebrated on December 7.
Ambrose is ranked with the great Western Christian leaders of the time: Augustine, St. Jerome, St. Gregory the Great, and St. Hilary of Poitiers. Ambrose was most known for his administrative talents, given his education and early experience before becoming a bishop. Yet, like Hilary he was an Alexandrian and was in the forefront in the doctrinal issues of the day, particularly those concerning Arianism. His sermons were famous and were influential in the conversion of Augustine. His endeavors in hymn writing became models of hymns of dignified simplicity for future times. Ambrose is credited with introducing antiphonal chanting wherein one choir alternates with another. Of particular note is that Ambrose baptized Augustine, his celebrated convert. 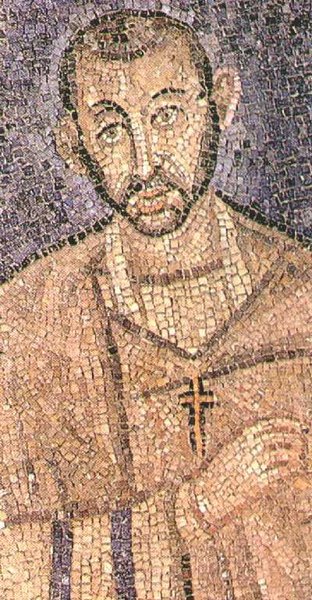 From OrthodoxWiki are the icon, introduction and conclusion of the excerpt "More on Ambrose ..."
An article from ChristianHistory.net about Ambrose, click here.