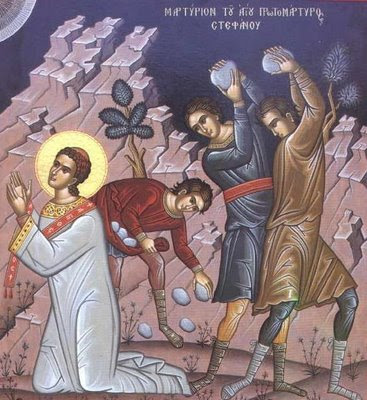 Icon is from Orthodox Wiki
The Holy Protomartyr Stephen is commemorated on December 27 by the Eastern Orthodox Church. Stephen was the first of the seven deacons chosen to minster to the material needs of the early Christian community. He was a wise administrator and a profound preacher. Read his great sermon to the Jewish authorities in the seventh chapter of the book of Acts, which also recounts his death by stoning and his final words, “Lord, do not hold this sin against them … Lord Jesus, receive my spirit.”

Troparion (Tone 4)
O First Martyr and Apostle Of Christ,
Thou hadst fought the good fight.
And didst expose the perversion of the persecutors,
For when thou wast killed by stoning at the hands of wicked men,
Thou didst receive a crown from the right hand on high,
And didst cry out to God saying,
"O Lord do not charge this sin against them!"
Kontakion (Tone 3)
Yesterday the Master came to us as a man,
And today his servant departs from life.
Yesterday the King was born as a man,
And today His servant is stoned to death.
For the sake of Christ Holy Stephen became the first martyr.
Posted by kbkl at 5:43 PM