Basil is one of the great fathers of the church. Born at Caesarea of Cappadocia in 329 or 330, he began his studies in Caesarea and continued them at Constantinople and Athens. He was ordained to the priesthood by Eusebius, bishop of Caesarea, and succeeded him in 370. He died on January 1, 379. He is the father of Eastern monasticism. 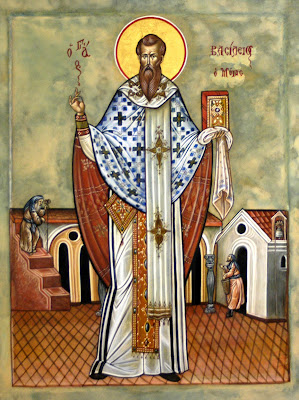 The title "great" is often used in reference to military leaders who have commanded mighty armies and rulers who have reigned long and gloriously over kingdoms. The Church, however, has bestowed this honorable name on relatively few of the many people who have faithfully served the Lord as His saints. One such individual is depicted here - ST. BASIL THE GREAT.
St. Basil was born in Caesarea in Asia Minor in 330 AD. In his youth, he was a brilliant scholar, excelling in philosophy, astronomy, and public speaking. Because of his education and training, St. Basil’s life could have branched out in many different directions, but he chose the "road less traveled" and followed Christ. Following his baptism in the Jordan River, Basil quickly rose to prominence in the Church. At the age of 40, he became Archbishop of Caesarea in Cappadocia - his boyhood home. Although his episcopacy was relatively brief - he was to die 10 years later - St. Basil's accomplishments have had a far-reaching and lasting effect on the Church. He set down a practical rule of life for monastics. He was a liturgist - he compiled the Divine Liturgy that is still served several times a year in our Holy Orthodox Church.
In addition to his spiritual concerns for his flock, he recognized the Church's role in caring for the material needs of the faithful as well. It was Basil the Great who established the first hospitals, orphanages and homes for the elderly. St. Basil was also a strong defender of the Faith - standing up for the true teachings of the Church throughout the lengthy Arian heresy that caused division among believers in the 4th century. It is no wonder that in the services for his Feast Day, St. Basil is referred to as “a bee of the Church of Christ, bringing honey to the faithful, but stinging those in heresy."
The Orthodox Weekly Bulletin ...... Vestal, Cliffwood, New Jersey ...... Litho in USA
Excerpts from OrthodoxWiki
Our father among the saints Basil the Great (ca. 330 - January 1, 379), was bishop of Caesarea, a leading churchman in the 4th century. The Church considers him a saint and one of the Three Holy Hierarchs, together with Saints Gregory the Theologian (Gregory Nazianzus) and John Chrysostom. Basil, Gregory the Theologian, and Basil's brother Saint Gregory of Nyssa are called the Cappadocian Fathers. The Roman Catholic Church also considers him a saint and calls him a Doctor of the Church.
Basil was born about 330 at Caesarea in Cappadocia. He came from a wealthy and pious family which gave a number of saints, including his mother Saint Emily (also styled Emilia or Emmelia), grandmother Saint Macrina the Elder, sister Saint Macrina the Younger and brothers Saints Gregory of Nyssa and Peter of Sebaste. It is also a widely held tradition that Saint Theosebia was his youngest sister, who is also a saint in the Church.

Troparion (Tone 1)
Your proclamation has gone out into all the earth
Which was divinely taught by hearing your voice
Expounding the nature of creatures,
Ennobling the manners of men.
O holy father of a royal priesthood,
Entreat Christ God that our souls may be saved.
Kontakion (Tone 4)
You were revealed as the sure foundation of the Church,
Granting all men a lordship which cannot be taken away,
Sealing it with your precepts,
O Venerable and Heavenly Father Basil.
Excerpts from Wikipedia
Basil, Gregory of Nazianzus, and Gregory of Nyssa are collectively referred to as the Cappadocian Fathers. The Eastern Orthodox Church and Eastern Catholic Churches have given him, together with Gregory of Nazianzus and John Chrysostom, the title of Great Hierarch. The Eastern Orthodox Church and the Roman Catholic Church have also named him a Doctor of the Church. He is also referred to as "the revealer of heavenly mysteries" (Ouranophantor).
St Basil was given the title Doctor of the Church for his contributions to the debate initiated by the Arian controversy regarding the nature of the Trinity, and especially the question of the divinity of the Holy Spirit. Basil was responsible for defining the terms "ousia" (essence/substance) and "hypostasis" (person/reality), and for defining the classic formulation of three Persons in one Nature. His single greatest contribution was his insistence on the divinity and consubstantiality of the Holy Spirit with the Father and the Son.
In Greek tradition, his name was given to Father Christmas and he is supposed to visit children and give presents every January 1 (St Basil's Day) — unlike other traditions where Saint Nicholas arrives either on December 6 (Saint Nicholas Day) or on Christmas Eve (December 24). It is traditional on St Basil's Day to serve "Vasilopita", a rich bread baked with a coin inside. It is customary on his feast day to visit the homes of friends and relatives, to sing New Year carols, and to set an extra place at the table for Saint Basil. In Greek tradition and according to historical records, St Basil, of Greek heritage, is the original "Father Christmas", who being born into a wealthy family, gave away all his possessions to the poor and those in need, the underprivileged and children. A similar story exists for another Greek bishop, St. Nicholas of Myra. Over the centuries the two have been merged but the Western "Santa Claus" is St. Nicholas and the Eastern "Santa Claus" is St. Basil. [citation needed]
Saint Basil died on January 1, and the Eastern Orthodox Church celebrates his feast day together with that of the Feast of the Circumcision (of Christ) on that day.
The Roman Catholic Church celebrates Saint Basil on January 2, rather than January 1.
The Anglican Church celebrates Saint Basil's feast on January 2,
The Episcopal Church celebrates it on June 14.
The Lutheran Church celebrates st. Basil, St Gregory of Nazianzus (a.k.a. Gregory the Theologian), and St. Greogory of Nyssa on January 10
In the Byzantine Rite, January 30 is the Synaxis of the Three Holy Hierarchs, in honor of Saint Basil, Saint Gregory the Theologian and Saint John Chrysostom.
The Coptic Orthodox Church of Alexandria celebrates the feast day of Saint Basil on January 14 or January 15 during leap year. [citation needed]
There are numerous relics of Saint Basil throughout the world. One of the most important is his head, which is preserved to this day at the monastery of the Great Lavra on Mount Athos in Greece. The mythical sword Durandal is said to contain some of Basil's blood.
Posted by kbkl at 11:09 AM