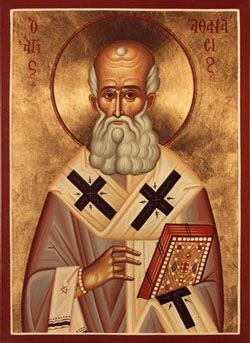 Icon copyright by Holy Transfiguration Monastary (Brookline, Massachusetts)
Saint Athanasius, pillar of Orthodoxy and Father of the Church, was born in Alexandria in 275, to pious Christian parents. Even as a child, his piety and devotion to the Faith were so notable that Alexander, the Patriarch of the city, took Athanasius under his protection. As s student, he acquired a thorough education, but was more interested in things of God than in secular learning, and withdrew for a time into the desert to sit at the feet of Saint Anthony, whose disciple he became and whose biography he later wrote. On returning to Alexandria, he was ordained to the diaconate and began his public labours for the Church. He wrote his treatise On the Incarnation, when he was only twenty. (It contains a phrase, still often quoted today, that express in a few words some of the depths of the Mystery of the Incarnation: God became man that man might become god.)

Just at this time Arius, a priest in Alexandria, was promoting his enticing view that the Son and Word of God is not of one essence with the Father, but a divine creation of the Father. This view, which (as Athanasius realized) strikes at the very possibility of mankind’s salvation, gained wide acceptance and seemed for a time to threaten the Christian Faith itself. In 325, the Emperor Constantine the Great convoked a Council of the Church at Nicaea to settle the turmoil that had the Arian teaching had spread through the Church. Athanasius attended the Council, and defended the Orthodox view so powerfully that he won the admiration of the Orthodox and the undying enmity of the Arians. From that time forth his life was founded on the defense of the true consubstantiality (homoousia) of the Son with the Father.

In 326, not long before his death, Patriarch Alexander appointed Athanasius to be his successor, and Athanasius was duly elevated to the patriarchal throne. He was active in his pastoral role, traveling throughout Egypt, visiting churches and monasteries, and working tirelessly not only to put down the Arian heresy, but to resolve various schisms and moral declines that affected his territory.

Though the Arian heresy had apparently been condemned once and for all at Nicea, Arius had many powerful allies throughout the Empire, even in the Imperial court, and Athanasius was soon subjected to many kinds of persecution, some local, some coming from the Imperial throne itself. Though he was Patriarch of Alexandria for more than forty years, a large amount of that time was spent in hiding from powerful enemies who threatened him with imprisonment or death. Twice he fled to Rome for protection by the Pope, who in the early centuries of the Church was a consistent champion of Orthodoxy against its various enemies. From his various hiding places, Athanasius issued tracts, treatises and epistles which helped to rally the faithful throughout Christendom to the Orthodox cause.

In 366, the Emperor Valens, fearing a revolt of the Egyptians on behalf of their beloved Archbishop, officially restored Athanasius to favour, and he was able to spend the last seven years of his life in peace. Of his forty-seven years as Patriarch, about seventeen were spent in hiding or exile. He reposed in peace in 373, having given his entire adult life, at great suffering, to the defense of the Faith of Christ.

A Worthy Champion of Our Orthodox Faith
"Shining forth with works of Orthodoxy, you quenched every false belief and teaching"

Saint Athanasius the Great was born in Alexandria, Egypt, around 295. His childhood was spent during the years that Christians were persecuted for their faith. He lived among people who suffered, and he was taught by teachers who suffered for Christ. But by 313, peace came to Christians, for Constantine the Great granted religious freedom after his famed vision of the Cross.

Now however, a different enemy arose - one from within the Church. The heresy of Arius infected the Church and caused great troubles. It was young Athanasius, now an archdeacon and secretary to the aged Patriarch of Alexandria, who arose to defend the faith. He relentlessly challenged Arians on the real issue: “Either admit that the Son is of the same substance with the Father, or say openly that He is a creature, in which case He cannot be worshipped …”

The controversy resulted in the the Emperor calling the Great Council, held in 318 at Nicea. It was Athanasius who led the struggle against the heresy. The Patriarch died shortly after the council, and Athanasius was elected to succeed him. He had a stormy career as Archbishop. The Arian troubles did not fade away but persisted for years. Five times Athanasius was banished; five times he returned in triumph, to the joy of the people.

Athanasius was archbishop for some 46 years, and he was 77 years old when death came in 373. This warrior for Christ finally received his crown of glory.
The Orthodox Weekly Bulletin …… Cestal, Cliffwood, New Jersey …… Litho in U.S.A.