Our Father Among the Saints Gregory the Theologian, Patriarch of Constantinople 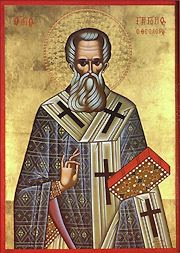 Icon copyright from St. Issac the Syrian Skete (Boscobel, Wisconsin)
This light of the Church is one of only three holy Fathers whom the Church has honoured with the name “the Theologian”. The others are St. John the Evangelist and Theologian, and St. Symeon the New Theologian.
He was born in 329 in Arianzus in Cappadocia to a pious and holy family; his father Gregory, mother Nonna, brother Caesarius, and sister Gorgonia are all counted among the Saints of the Church. His father later became Bishop of Nazianzus. He studied in Palestine, then in Alexandria, then in Athens. On the way to Athens, his ship was almost sunk in a violent storm; Gregory , who had not yet been baptized, prayed to the Lord to preserve him, and promised that henceforth he would dedicate his entire life to God. Immediately the storm ceased.

In Athens, Gregory’s fellow students included St. Basil the Great and the future Emperor Julian the Apostate. The friendship between Gregory and Basil blossomed into a true spiritual friendship; they were loving brothers in Christ for the rest of their lives. After completing their studies, Ss. Gregory and Basil lived together as monks in hermitages at Pontus. Much against St. Gregory’s will, his father ordained him a priest, and St. Basil consecrated him Bishop of Sasima (in the Archdiocese of Caesarea, over which St. Basil was Archbishop).

In 381 the Second Ecumenical Council condemned Macedonius, Archbishop of Constantinople and appointed St. Gregory in his place. When he arrived in the City, he found that the Arians controlled all the churches. And he was forced to “rule” from a small house chapel. From there he preached his five great sermons on the Trinity, the Triadica; these were so powerfully influential that when he left Constantinople two years later, every church in the City had been restored to the Orthodox.

St. Gregory was always a theologian and a contemplative, not an administrator, and the duties of Archbishop were agonizing to him. In 382 he received permission from a council of his fellow-bishops and the Emperor to retire from the see of Constantinople. He returned to Nazianzus (for which reason he is sometimes called St. Gregory of Nazianzus). There he reposed in peace in 391 at the age of sixty-two.

His writings show a theological depth and a sublimity of expression perhaps unsurpassed in the Church. His teaching on the Holy Trinity is a great bastion of Orthodox Faith; in almost every one of his published homilies he preaches the Trinity undivided and of one essence.

Excerpt from Wikipedia:
Gregory made a significant impact on the shape of Trinitarian theology among both Greek-speaking and Latin-speaking theologians, and he is remembered as the "Trinitarian Theologian". Much of his theological work continues to influence modern theologians, especially in regard to the relationship among the three Persons of the Trinity.

As Gregory's works circulated throughout the Roman Empire they influenced theological thought. His orations were cited as authoritative by the First Council of Ephesus in 431. By 451 he was designated Theologus, or Theologian by the Council of Chalcedon - a title held by no others save John the Apostle and Symeon the New Theologian. He is widely quoted by Eastern Orthodox theologians and highly regarded as a defender of the Christian faith. His contributions to Trinitarian theology are also influential and often cited in the Western churches. Paul Tillich (one of the most influential Protestant theologians of the 20th century) credits Gregory of Nazianzus for having "created the definitive formulae for the doctrine of the trinity".

Excerpt from Orthodox Wiki:
Having governed the Church until 382, he delivered his farewell speech - the Syntacterion, in which he demonstrated the Divinity of the Son - before 150 bishops and the Emperor Theodosius the Great. Also in this speech he requested, and received from all, permission to retire from the See of Constantinople. He returned to Nazianzus, where he lived to the end of his life. He reposed in the Lord in 391, having lived some sixty-two years.

His extant writings, both prose and poems in every type of matter, demonstrate his lofty eloquence and his wondrous breadth of learning. In the beauty of his writings, he is considered to have surpassed the Greek writers of antiquity, and because of his God-inspired theological thought, he received the surname "Theologian." Although he is sometimes called Gregory of Nazianzus, this title belongs properly to his father; he himself is known by the Church only as Gregory the Theologian. He is especially called "Trinitarian Theologian," since in virtually every homily he refers to the Trinity and the one essence and nature of the Godhead. Hence, Alexius Anthorus dedicated the following verses to him:

Like an unwandering star beaming with splendour,
Thou bringest us by mystic teachings, O Father,
To the Trinity's sunlike illumination,
O mouth breathing with fire, Gregory most mighty.

Final note:
Along with the two brothers, Basil the Great and Gregory of Nyssa, Gregory the Theologian is known as one of the Cappadocian Fathers. Gregory is a saint in both Eastern and Western Christianity. In the Roman Catholic Church he is numbered among the Doctors of the Church; in Eastern Orthodoxy and the Eastern Catholic Churches he is revered as one of the Three Holy Hierarchs, along with Basil the Great and John Chrysostom.
Posted by kbkl at 3:31 PM