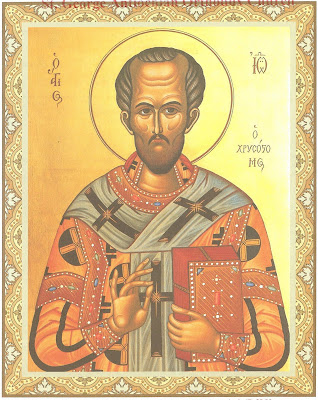 The Church celebrated the memory of this saint on November 13th and January 30th, but on this day is celebrated the translation of his honoured relics from the Armenian village of Comana, where he died in exile in 407, to Constantinople where earlier, as Patriarch, he had governed the Church. Thirsty years after his death, Patriarch Proclus made a speech in memory of his spiritual father and mentor, and by this speech so roused the love of the people and the Emperor, Theodosius the Younger, towards the great saint that they all wanted the relics of Chrysostom to be translated to Constantinople. It is related that the coffin containing the relics could not be shifted from its place until the Emperor wrote a letter to Chrysostom, begging his forgiveness (for Theodosius’s mother, Eudoxia, was guilty of having persecuted the saint) and appealing to him to return to Constantinople, his former residence. When this repentant letter was placed on the coffin, the latter became light in weight. Before the translation, many of the sick, on touching the coffin, were healed. When the relics arrived at the capital, the Emperor again begged forgiveness over them in his mother’s name, as though it were she herself speaking: “While I lived in this temporal life, I acted in malice towards thee; but now that thou livest in eternal life, be thou of help to my soul. My glory passes and there is nought to help me; help me, Father, in thy glory; help me before I come to be condemned before the judgement of Christ.” When the saint was carried into the Church of the Holy Apostles and placed on the patriarchal throne, the assembled throng heard these words from his mouth: “Peace be with you all!” The translation of the relics of St. John Chrysostom was carried out in the year 438.
PRAYER TO ST. JOHN CHRYSOSTOM
O Holy Father John Chrysostom, you served the Church with dignity and piety throughout your life. You fearlessly preached the Gospel of Christ from your Ecumenical Throne in Constantinople, as grace shone forth from your "golden mouth" like beacons of light, enlightening the entire universe. Living in an era of opulence, you shunned the wealth of the world and showed us that true riches can be found in sincerely, humbly and obediently following an ascetic life of prayer, fasting and almsgiving. Truly you “practiced what you preached,” feeding the hungry and caring for the sick with your own financial means as you deprived yourself of physical comforts. O venerable John Chrysostom, you provided us with the liturgical structure of worshipping the Triune God by giving us the Divine Liturgy that still bears your name, causing us to realize the necessity of seeking frequent communion with our Creator. Through your own moral example, you taught us the importance of standing firm in our Orthodox Christian beliefs, no matter what trials and tribulations we may face. We implore you to intercede for us before God the Word. May we continue to find wisdom in the words of your teachings and in the messages of your sermons. And may your final words - uttered at a time of great personal persecution as you traveled the road to your exile and ultimate death - be the words that guide and inspire us along each step of our own earthly journey: Glory to God for all things!
The Orthodox Weekly Bulletin … Vestal, Cliffwood, New Jersey … Litho in USA
Posted by kbkl at 6:54 PM