The Apostle and Evangelist Matthew 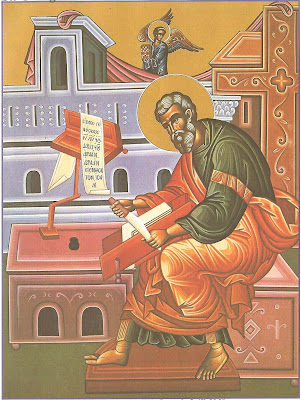 It is fascinating to note that our Lord did not select scholars and religious leaders of His time to be His trusted disciples, but rather those who would be classified as "common, ordinary men." The Apostle Matthew certainly fits that description! Matthew, also known as Levi, was a tax collector in the town of Capernaum. Paying taxes has never been a popular task, and those who gathered these funds for the Romans were despised and hated by their own people. While hard at work one day, Matthew heard two words from Christ that changed his entire life: FOLLOW ME! Immediately, he obeyed, leaving his job and leaving behind his former way of life.

It is recorded in the Gospel that bears his name that the first thing Matthew did after his calling was invite, Jesus to his house for a feast. Christ was criticized for being in the company of those who were "publicans and great sinners," to which He replied: THOSE WHO ARE WELL HAVE NO NEED FOR A PHYSICIAN, BUT THOSE WHO ARE SICK DO.

After the descent of the Holy Spirit upon the Apostles on Pentecost, Matthew spread our Saviour's message to the Jews in Palestine. Some ancient writers credit him with carrying the "good news" to Ethiopia, as well as the regions of Persia and Syria. It was in Ethiopia that he is thought to have died a martyr's death at the hands of pagans.

The Gospel of St. Matthew was written in Aramaic, the common language of the Jews during the time of Christ. In his writings, Matthew presents Christ as being the Fulfillment of Old Testament prophecy, conclusively showing Him to be the Incarnate Son of God.

Troparion (Tone 3)
With zeal, you followed Christ the Master,
Who in His goodness, appeared on earth to mankind.
Summoning you from the custom house,
He revealed you as a chosen apostle:
the proclaimer of the Gospel to the whole world!
Therefore, divinely eloquent Matthew,
we honor your precious memory!
Entreat merciful God that He may grant our souls remission of transgressions.

Kontakion (Tone 4)
Casting aside the bonds of the custom house for the yoke of justice,
you were revealed as an excellent merchant, rich in wisdom from on high.
You proclaimed the word of truth
and roused the souls of the slothful
by writing of the hour of Judgment.
The Orthodox Weekly Bulletin … Vestal, Cliffwood, New Jersey … Litho in USA
Posted by kbkl at 11:14 AM