One of the myrrh-bearing women and equal to the apostles, Mary was born in the town of Magdala, along the shore of Lake Gennesaret, of the tribe of Issachar. She was tormented by seven evil spirits – from which she was freed by the Lord Jesus and made whole. She was a faithful follower and servant of the Lord during His earthly life. She stood beneath the Cross on Golgotha, and grieved bitterly with the All-holy Theotokos. After the death of the Lord she visited His sepulcher three times. When the Lord rose again she saw Him on two occasions: once by herself, and once with the other myrrh-bearing women. She traveled to Rome and appeared before Tiberias Caesar, presenting him with a red egg, and giving him the salutation: “Christ is Risen!” She also denounced Pontius Pilate to Caesar for his unjust condemnation of the Lord Jesus. Caesar accepted her accusation, and transferred Pilate from Jerusalem to Gaul where, in disfavour with the emperor, this unjust judge died of a dread disease. After this, she returned from Rome to Ephesus, to assist St. John the Theologian in the work of preaching the Gospel. With great love toward the resurrected Lord, with great zeal for the Faith and as a true apostle of Christ, she proclaimed the Holy Gospel to the world. She died peacefully in Ephesus. According to tradition, the cave she was buried in was the same cave in which the Seven Youths (August 4) later slept a wondrous sleep for hundreds of years, then came to life and again died. The relics of St. Mary Magdalene were later transferred to Constantinople. There is a beautiful Russian Orthodox convent dedicated to St. Mary Magdalene near the Garden of Gethsemane. 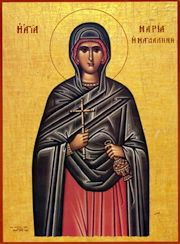 Hymn of Praise - Saint Mary Magdalene
Magalene was shrouded in dark sorrow
Because of the bloody death of the Son of God.
Sorrow from love is most bitter sorrow –
She had neither consolation nor friend in the world.
Her tears were her comfort, and pain was her only friend.
For St. Magdalene, the world was turned to darkness
As a weak human, she sought light,
And Mary groped in the darkness, without hope.
Even His tomb to her was light – but lo! The tomb is empty!
“He has been stolen,” she thought, “naked and unanointed!”
Bitterly she wept, and there was no end to her weeping.
Then she heard the voice of a man beside her:
Woman, why weepest thou? Whom seekest thou?
“You ask Whom I seek? Do you wish to calm me?
If you have taken His body, tell me where you have put it.”
Jesus looked upon her as she wept and sorrowed
And called to her in a sweet voice: “Mary!”
Light shone forth in Mary’s heart:
O voice now recognized, incomparably sweet,
O voice overflowing with life and power!
With this voice the Lord healed the sick,
With this voice He raised the dead.
O life-giving voice – O wondrous voice!
Mary sprang up and turned around:
“Rabboni!” she cried as the sun rose.
For Mary and for the world, a new Day dawned.
Posted by kbkl at 7:14 PM