A Holy Group of Christ’s Disciples 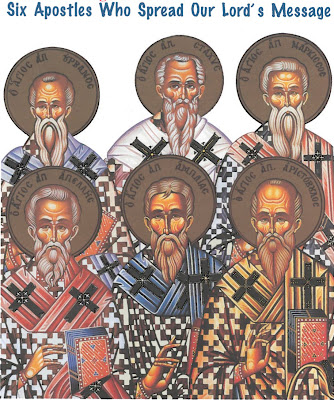 In ’s Letter to the Romans, several of Christ’s “Seventy Apostles” are mentioned. Six of them are on this icon: Stachys, Amplias, Urbanus, Apelles, Aristobulus, and Narcissus. These zealous and dedicated labourers in the vineyard of Christ are all commemorated on the same day on our Church Calendar.
In addition to their connection with the Apostle Paul, these six saints were closely connected with the Apostle Andrew as well. In fact, five of them were ordained bishops by St. Andrew for various Christian communities.
The APOSTLE STACHYS might be viewed as the most prominent of this illustrious group. He was ordained as the first Bishop of Byzantium, which eventually became known as the great city of .  AMPLIAS became the first Bishop of Odyssopoulos, where he was eventually martyred for the Faith. URBANUS was chosen to be the first Bishop for the region of , where he too, suffered martyrdom. NARCISSUS, according to the Tradition of the Church, was ordained by St. Andrew as Bishop of Athens, while ARISTOBULUS received similar acclaim as Bishop of Brittany. Like their fellow apostles, they too gave their lives in the service of the Lord.
Each of these saints exhibited a total dedication to our Saviour. This was evident in their ceaseless efforts to foster this new faith called “Christianity” to not only gain a foothold but thrive for centuries to come.