The Holy and Glorious Apostle Thomas 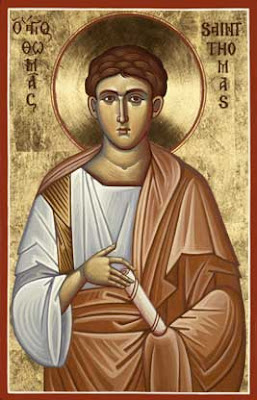 Thomas was one of the twelve apostles who would not believe in the resurrection of Jesus until he saw Him. Thomas later went to India where he founded a church. Arriving late for the Theotokos' funeral, the tomb was opened for him. It was discovered that her body was not there but had been translated to heaven. He was martyred in India. 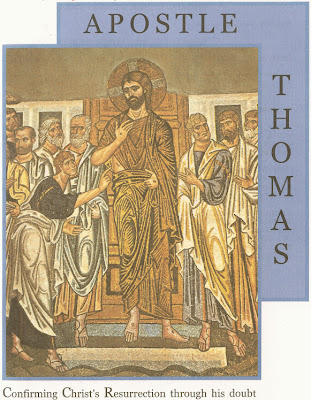 The Orthodox Weekly Bulletin ... Vestal Cliffwood, New Jersey ... Litho in USA
Impressions of people are very difficult to change. The Apostle Thomas, for will always be remembered for having a lack of faith. His statement - UNLESS I SEE IN HIS HANDS THE PRINT OF THE NAILS, AND PUT MY FINGER INTO THE PRINT OF THE NAILS, AND PUT MY HAND IN HIS SIDE, I WILL NOT BELIEVE - will forever label him as the "doubting Thomas."
It should be noted, however, that Thomas also leaves behind a rich legacy of missionary service. After the descent of the Holy Spirit on Pentecost, tradition tells us that the Apostles cast lots to see where each of them would go to preach the Gospel. It fell upon Thomas to travel to India to spread the message of the Risen Christ. Although reluctant to embark upon such a lengthy journey, Thomas went to India, winning over a great number of converts to the Christian faith. Among his converts were two sisters, Tertiana and Mygdonia, who were married to Indian princes. The husband of Tertiana was so angered by this that he ordered Thomas to be executed. Five soldiers were sent to put him to death by running him through with their lances.
Before his death, Thomas, along with the other Apostles, were miraculously borne to Jerusalem for the funeral of the Mother of God. Arriving late, Thomas asked that the tomb of Mary be opened, so that he could pay his final respects properly. Miraculously, the body of the Theotokos was not there! The Lord had taken His Mother to His heavenly home!

Thou wast a disciple of Christ and one of the Twelve,
and by thy unbelief didst proclaim Christ's Resurrection.
By touch thou wast assured of His holy Passion,
O glorious Apostle Thomas.
Pray to Him to grant us peace and mercy
Posted by kbkl at 7:27 PM