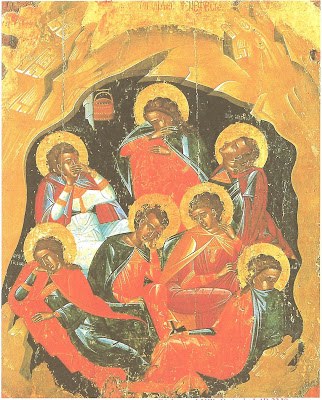 Do you remember the story of Rip Van Winkle -the man who fell asleep and found when he awoke that some twenty years had passed? The Lives of the Saints tell us a marvelous story about the 7 YOUTHS OF EPHESUS, whose "slumber time" far exceeded Washington Irving's fictional character! They lived during the reign of the Emperor Decius in the 3rd century. Being childhood friends, it was natural for them to serve together in the army. When the Emperor paid a visit to Ephesus one day, he insisted that all citizens offer a sacrifice to the pagan Roman gods. The 7 youths refused, admitting they were followers of Christ. They were stripped of their military dignity, but allowed to go free. Decius had hoped they would "come to their senses" but instead the boys fled and hid in a cave on the outskirts of the city. When the enraged emperor discovered what had happened, he had the entrance of the cave sealed, leaving the boys to suffer an inevitable death. Miraculously, the Lord placed the 7 youths into a deep sleep, which lasted 2 centuries! When a land owner opened the cave's entrance, he was amazed to find the “sleepers,” who themselves did not realize that 200 years had passed. A container that was secretly put in the cave by a Christian guard while the cave was being sealed revealed the details of what had happened so long ago. Their awakening came at a time when a certain faction in the Church was expressing doubts about a general resurrection of the dead, maintaining that the bodies of the deceased would disintegrate and could not be united to their souls. In effect, God revealed the mystery of the resurrection of the dead and offered a glimpse of eternal life through the 7 youths. It is said that after the emperor himself came to speak to them, they laid back down and fell asleep again - this time until the 2nd Coming.
Orthodox Weekly Bulletin • • • • • • • • • Vestal, Cliffwood, New Jersey • • • • • • • • • Litho in USA
Posted by kbkl at 12:41 PM