St. Romanus – Make a Joyful Sound unto the Lord 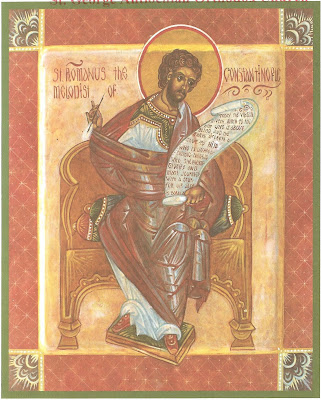 Icon by Nataliya Zharsky - The Prosopon School of Iconology
St. Romanus is considered to be one of the greatest composers of sacred hymns that the Church has ever known. He composed over 1,000 hymns in his lifetime, of which some 80 have been preserved for use in our divine services today. He is the patron saint of singers -and an inspiration for the "musically challenged" as well, for Romanus was not always the "sweet-singer" that he ultimately became.

Romanus was born in the 5th century in the Syrian town of Emesa. Although his parents were Jewish, he became a devout follower of Christ and when he moved to Constantinople, Romanus became a church sacristan in the great cathedral of Hagia Sophia. Although he wanted to assist in the reading and chanting of the services, the truth of the matter was Romanus had no musical training and little self-confidence. Once on Christmas Eve, he was given some verses to read during Matins, He read so poorly that another reader was asked to finish for him, causing him to be the object of great ridicule by the cathedral clergy, The devastated Romanus returned home, vowing never to return to church again.

That night, as Romanus was praying before the icon of the Theotokos, the Virgin appeared to him. She handed him a scroll and commanded him to eat it. By doing so, Romanus was now blessed with the ability to write hymns and to sing them clearly and beautifully, Working feverishly throughout the evening, Romanus composed his first hymn: the Kontakion for the Nativity, The next day, Romanus stood in front of the filled cathedral and angelically sang: "Today the Virgin gives birth to the Transcendent One”. St. Romanus was later ordained a deacon, continuing to share his newfound musical gifts with others.
Posted by kbkl at 11:58 AM