Elevation of the Holy Cross 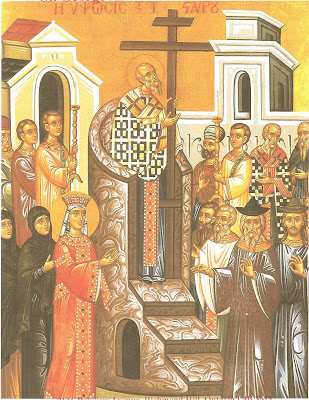 The Orthodox Weekly Bulletin … Vestal, Cliffwood, New Jersey … Litho in U.S.A.
There are two stories surrounding the precious and life-giving Cross of our Saviour that bear repeating as we commemorate the Feast Day of its Exaltation and Elevation. The first story centres on how it came to be found by St. Helena, the mother of Emperor Constantine, in the first place. It seems that the St. Helena led an expedition to Jerusalem, determined to find this greatest of all Christian relics. Nearly 300 years had passed since Christ’s Crucifixion: who would remember what happened to the Cross? After inquiring of scores of Christians and Jews alike, an elderly Hebrew named Jude was able to shed some light on this clouded picture. He believed that the Cross was buried under a pagan temple dedicated to Venus. The temple was destroyed and the cross discovered! After witnessing a dead man being brought back to life and a sick woman cured instantly after being touched by the Cross, Jude himself declared his belief in Christ and was baptized into the Faith. This humble man received the name “Cyriacus” and later became Bishop of Jerusalem, suffering a martyr’s death during the reign of Julian the Apostate.

The second story would occur over 300 years later. In the 7th century, the Cross was seized and taken from Jerusalem to Persia. When it was later recaptured and returned to Jerusalem, the Emperor Heraclius, gloriously arrayed in his imperial crown and finest purple robes, attempted to carry it back into the Church of the Resurrection. An invisible force, however, blocked his path! The Patriarch Zacharias pointed out that the One Who originally carried the Cross to Golgotha did so with great humility. It was only when the Emperor removed his lavish garments that he was able to make his entrance into the church.
The Orthodox Weekly Bulletin … Vestal, Cliffwood, New Jersey … Litho in U.S.A.

The Basilica of the Holy Resurrection in Jerusalem was built by St. Helena at Golgotha on the site where she found the precious Cross. Under the roof were the places where the Lord was crucified and buried. The date of September 13 was chosen to counteract a pagan celebration in honour of the temple of Jupiter on the capitol in Rome, observed on the same date.
The Holy Cross was preserved in the Basilica of the Resurrection in Jerusalem until May 4, 614 when the Persians seized the city and burned the basilica. In 628, Emperor Heraclius defeated the Persians and returned the Holy Cross to Jerusalem.
Posted by kbkl at 12:22 PM