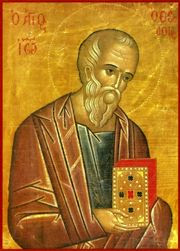 St. John the Theologian from Orthowiki
John was "the apostle Jesus loved." When all had forsaken Jesus, John stayed beneath the cross with the Theotokos whom he cared for as a mother right to her falling asleep. Exiled to Patmos by Emperor Domitian, he wrote the Revelation and his Gospel there. He is called "the theologian" because his five New Testament writings, that is the Gospel, Revelation, and the three epistles show him to be " the breath of the Holy Spirit." He was over a hundred years old when he died. When his disciples later opened his tomb, they found his body was not there. Often the expression "dormition" or "falling asleep" is used for his death.
by Anthony Coinaris in Daily Vitamins for Spiritual Growth 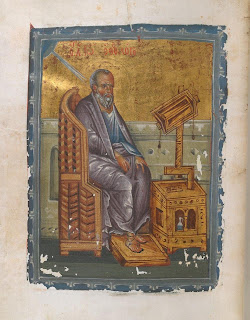 St. John the Evangelist from Wikipedia
TROPARION OF ST. JOHN
O APOSTLE, SPEAKER OF DIVINITY, THE BELOVED OF CHRIST GOD, HASTEN AND DELIVER THY PEOPLE POWERLESS IN ARGUEMENT; FOR HE ON WHOSE BOSOM THOU DID LEAN ACCEPTETH THEE AS AN INTERCESSOR. BESEECH HIM, THEREFORE, TO DISPERSE THE CLOUD  OF THE STUBBORN NATIONS, ASKING FOR US SAFETY AND THE GREAT MERCY.
Posted by kbkl at 11:43 AM