Nativity of the Holy Virgin

The story of the birth of the Theotokos is found in a second century manuscript called the Pro-Gospel of James. Both Joachim and Anna had been praying for years for a child. On day while Joachim prayed in the desert and Anna at home, an angel of the Lord appeared to both and announce the conception of a daughter who would have a great destiny. Overwhelmed with joy, Anna ultimately gave birth to Mary.
Anthony Coniaris in Daily Vitamin for Spiritual Growth

In the city of Nazareth there dwelled a God-fearing elderly couple, Joachim, from the house of David, and Anna, from the priestly tribe of Aaron. In those days Hebrews, awaiting the Messiah, believed that any one who did not have children had in some way offended God and was being punished by having no descendants to be part of the Messiah's kingdom. Joachim and Anna grieved greatly because they were childless. Despite the ridicule and reproaches that Joachim and Anna received from their neighbors, they did not lose hope but continually prayed that God might grant them a child, which they promised to dedicate to the service of God. For their patience, their faith and their love of God and of each other, their prayers were heard: a daughter was born to them in their old age. An angel directed them to name the child Mary, which in Hebrew means "lady and hope." The one who was to be the Mother of God was born into a righteous family, known more throughout the generations for its goodness than for its royal blood. The importance of this feast, the first in the Church calendar year is that it was the first step in preparing mankind for its promised salvation.
Missionary Leaflet # E50 Copyright © 1999 and Published by
Holy Protection Russian Orthodox Church
2049 Argyle Ave. Los Angeles, California 90068
Editor: Bishop Alexander (Mileant) 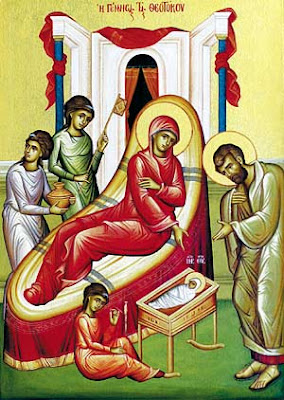 Icon from Holy Ascension Orthodox Church, Frackville, PA website
The Icon of the Nativity of the Theotokos
The icon of the Nativity of the Theotokos presents to us the central figures of Saints Joachim and Anna, Mary's parents, and the Mother of our Lord as an infant. Saint Anna is in the middle of the icon with her right hand extended toward her daughter. Likewise, Saint Joachim, Mary's father, is gazing upon the young child with his right hand extended toward her. Anna is surrounded by attendants who have assisted with the birth. The icon directs attention to Mary as the central figure in this feast. It also acknowledges the joy that was felt by Joachim and Anna as new parents with a child received through a promise from God. The liturgical texts of the feast acknowledge this joy and confirm the special role of Mary as the Mother of the Incarnate God, Jesus Christ. In this event, another step is made in sacred history in preparation for the entrance of Christ into the world. The icon and the feast also acknowledge a transition from barrenness to life. This was but another foreshadowing of what would be offered through Christ, the transformation from death to eternal life.
Holy Ascension Orthodox Church, Frackville, PA
Posted by kbkl at 1:17 PM